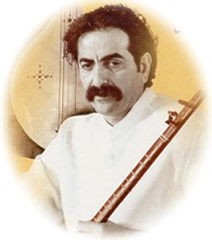 Shahram Nazeri was born in Kermanshah province in 1949. Like Shajarian, his music career started with the help of his father at childhood. He enjoyed the classes of the Persian music masters such as Abdullah Davami, Abdol Ali Vaziri, Jalal Zolfonoun, Mohammad Reza Shajarian and others. Since the provinces of Kermanshah and Kurdistan in western Iran are dominated with Sufism and the Dervish spinning around music, he showed great interest in this kind of traditional music, mostly accompanied by the poems of the Iranian transcendental poets like Rumi. His gentle voice as well as his unique style drew the attention of millions of Iranians in a very short time. He has several marvelous works such as Gol e Sad Barg (the one-hundred-leaf-flower), Yadegar e doust (the friend’s memoir), Seda ye Sokhan e Eshgh (the sound of Love’s Word), Shour Angiz (Joy Giver), and many others that impress any listener. For sure, he is one of those at the top of Persian transcendental music.

Two of his songs are chosen for this collection

More about Nazeri
Disclaimer: Easy Persian is not responsible for the contents of other sites