An elegy dedicated to Ahmad Shamlu 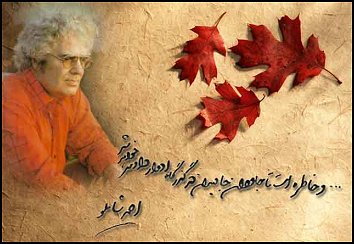 The picture is from the Official site of Ahmad Shamlu

Sunday, July 24, 2000 was the day when our literature alongside our people mourned deeply for one of their everlasting literary figures who will be missing generations after generations. It was a day when a nation lost a big man who had selflessly devoted his entire life to his labor of love. We mourned over a person who, with one light in his hand and one in front, never withdrew from his outstanding humane duty. The one, who granted a new life on the body of the literature, which for years, had been busy describing the funny hair of funny beloveds in the arid sky of its funny poets’ dreams. The one who successfully, yet almost lonely, did lead our Persian literature once more to its glorious climax centuries after Hafez and Rumi. The one who cried the humanitarian responsibilities through literary ideals. And the one, who passed over this planet, over this soil, without receiving a “warming hello” from those who lash love under the lampposts of the streets. Strange time my dearest!

The following poem is dedicated to Ahmad Shamlu in which Mr. Gheyaspour, the poet, has astonishingly expressed our deep sorrow over Shamlu’s death.

To make the poem more understandable, some points should be explained first.

Shamlu wrote a wonderful elegy, described as the best in its kind, when Forough died. It is called ‘an elegy for Forough’. The elegy starts with this line:

In search of you

On the mountains’ feet

At the threshold of seas where green grass ends

So, in the following poem ‘her’ refers to Forough.

The second one is the word ‘fairies’. Some decades ago, Shamlu wrote a long poem basically for children. It was called ‘fairies’ (Parya), which turned into a nationwide folklore poem. In the following poem, Mr. Gheyaspour has welcomed that poem through narrating the title and some lines of it.

The third one is the word ‘fairies’ king’, which refers to what Shamlu presented in his poem (fairies).

“In search of her

On the mountains’ feet

At the threshold of seas where green grass ends”

In search of you, yet,

On the foot of which mountain

The horse of our necessity

Neighs to the heavens

By the shrine of your big name

O, you the mad wind

How agonizing you blew!

Who will find your name

On the forehead of the heavens

At the dawn of a big dream?

In search of you

Who will ride the horse of necessity

To the faraway villages

Through the fog-covered deserts?

In the roots of which person

Your tears will turn into flowers?

From among us, which one?

Which one of us?

And you, o the fairies

Who came to our town, our sad-stricken town,

Do you know that

Has gone on a journey

To the peak of distant mountains

To bring you the tale of “The Fairies’ King”

To become a tale for you

A tale that is

As wide as the heavens

Do you know that?

“Nothing did say the fairies, but